Home / Blog / Sikorski Sausages are out of this world! – for a good cause

Starting in 1993 each year people from all over Poland gather on the first Sunday of January at the Grand Finale of The Great Orchestra of Christmas Charity Foundation to raise money for expensive medical equipment which can save many lives, especially the most vulnerable like children. In the 26 years of charitable endeavors, they raised over  951 million PLN! ($CAD 300 million) This year Sikorski Sausages, a meat company from London Ontario which founders also came from Poland, decided to take their part in this event and sponsor a very unusual flight of a Dwarf with a Golden Heart and…a few slices of sausage.

And where to Buy them!

Let’s ask the initiators and creators about the details – meet a patron of art who lived in Canada for 28 years,  Waldemar Plusa and his colleague, Technical Director of Flights Wlodzimierz Tarnowski:

What kind of technology allowed for this to be possible?

A Stratospheric balloon, which was powered by helium. In perfect weather conditions it can reach up to 40 km high. We have to remember that the stratosphere starts at
10 km and on the level of 20-30 km there are no commercial or military flights. Felix Baugartner jumped a height of 40 km and Red Bull spent 65 million dollars on the whole operation. Our funds were only $2800 Cad and Baugartner didn’t have a delicious sausage to eat 🙂

Where did this idea come from?

After the third Dwarf Space trip in December 2018, we realized we can do good and donate something valuable to one of the biggest Polish charity Auctions

The Great Orchestra of Christmas Charity. The first thing that came to my mind was to send a symbolic golden heart – “The heart to heaven”.

What did the dwarf take with it to the stratosphere?

The most important thing the dwarf took was the symbolic golden heart – “The heart to heaven” designed by me and created by by a Polish jewelry company named YES. Other than that it took some other great things from provided by our main sponsor

It also took a few threads of a scarf from Nepal, over the years threads have been auctioned off and provided additional funds to various charity organizations in Poland, it also took a few figures and toys donated by children and one candy.

What cameras did you use to preserve this magical moment?

Dwarf had 3 GoPro cameras, which 2 unfortunately got destroyed after landing they were run over by a car in Czech Republic. Luckily the driver did not stop and did not take the Heart to Heaven or anything else and the memory cards survived! Obviously we also used GPS and radio locating tools.

How much cargo can the balloon take?

The balloon we used can take up to 2000 grams. Most of it is mandatory equipment such as cameras gps, etc. Dwarf itself weighs only 78 grams. In the stratosphere the balloon expands repeatedly as much as the pressure inside allows. After this the balloon pops and and its starts to fall with the cargo with a parachute.

How high did the Dwarf get?

This time the dwarf reached 25 km! It’s total distance was 250 km from start to finish, flying at 200 km per hour.

How many times have you sent the Dwarf into space?

Since 1983, Sikorskis’ has been a proud ambassador of authentic Polish taste. It is a second-generation, family-owned company that is committed to creating the highest quality deli products available. For over 30 years, Sikorski has taken pride in providing the best deli meats for Canadians. The company has been awarded for the third year in a row in the Ontario’s Finest Meats Competition, winning a personal record of eight awards in competition against over 140 other products. 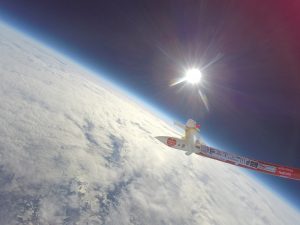 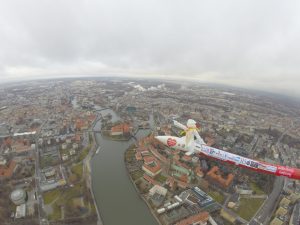 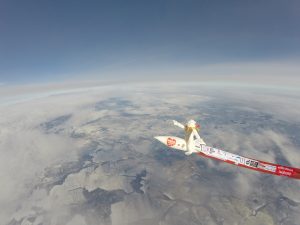